The Festival Fairies are the 33rd series and represent the religious festivals around the world. Without the fairies' magic, they will all go wrong.

There are four Festival fairies and they are: Deena the Diwali Fairy, Hana the Hanukkah Fairy, Elisha the Eid Fairy and Bea the Buddha Day Fairy.

Jack Frost is jealous of all the religious festivals in the world so he decides to steal the Festival Fairies’ objects to create Frost Day.

Scrap Hanukkah and make them see -

They should be celebrating me!

Bring gifts and sweets to celebrate

The many reasons I'm so great! 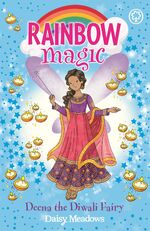 Deena has a brown plait and wears a pink and purple dress. Without her magic, diwali celebrations will be a mess.

Hana was inside a dreidel that the girls were playing with. She has brown curly hair and wears a blue dress. Without her magic, hannukah celebrations will become a disaster. 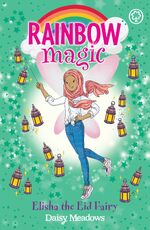 Elisha wears a pink hijab with a shirt, jeans and trainers. Without her magic, Eid celebrations will go wrong.

Bea has black hair and wears an orange dress with a gold sash. Without her magic, Buddha Day celebrations will go wrong.

Retrieved from "https://rainbowmagic.fandom.com/wiki/Festival_Fairies?oldid=64538"
Community content is available under CC-BY-SA unless otherwise noted.