The goblins are greedy, green creatures who are Jack Frost's servants. They are the main antagonists alongside their leader. They live in Goblin Grotto, a big village a while from Jack Frost's castle, although some goblins stay at the Ice Castle to act as servants.

Goblins cause lots of mischief and trouble. They are dim-witted and usually do whatever Jack Frost wants, but sometimes they only care about having fun. They often have trouble solving problems and that makes it easy to trick them. At times, goblins' feelings emerge and the girls sympathise for them, such as the time when the girls ruined a goblin's wig and he got upset.

They will do almost anything to keep the fairies' magical objects from being returned to Fairyland and back to their Master's castle but their own selfishness allows the girls to coerce them into defying Jack Frost and giving their objects back.

The goblins have green skin, beady eyes (either red or green), long noses and bony heads with sharp ears. They usually wear brown ragged leather skirts but in some of the books, they have disguises to fool the girls. They often fail as the girls recognize their big feet and noses. They used to be small and tiny in the early books, but later on they were changed so they are the size of an average child or the height of Rachel and Kirsty.

Female goblins, such as Jilly Chilly or the goblin in Charlotte the Baby Princess Fairy, wear lipstick and have a visible hair line.

In the narration, goblins are usually identified by their appearance, such as a wart on their nose or their weight. Some goblins have been addressed in a personal way. These include:

The goblins first came under Jack Frost's rule due to a contract made by Jack's great great grandfather and a goblin's great great grandmother. In exchange for a vanishing spell, the goblin's ancestor gave her and her family's services to him forever.

In the Rainbow Fairies series, the goblins' presence made the air around them cold. This froze over a pond that Sky the Blue Fairy was trapped in, almost causing her to fade away.

In the Weather Fairies series, Jack Frost cast a spell to have them the same size as the girls, but they still managed to get the Weather Feathers away from them.

In the Petal Fairies series, the goblins had an ice wand to prevent the girls and the fairies from retrieving the magic petals back.

In the Dance Fairies series, they had the power to freeze people by touching them and saying "freeze".

In the Music Fairies series, Jack Frost made them little boy-sized and flesh coloured to blend in with humans in the human world, but Kirsty and Rachel could still tell they were goblins because of their big feet and noses. They were also able to play the instruments in Frosty and his Gobolicious Band.

In the whole franchise, goblins are known to use the magic objects to benefit themselves rather than guard them for Jack Frost. Any object they guard, they can use for themselves, such as the time Gobby nearly joined A-OK due to Adele the Singing Coach Fairy's object, or becoming great artists whilst using Annabelle the Drawing Fairy's object.

In Return to Rainspell Island

In the series of Rainbow Magic books, there are multiple goblins. But in the the movie, Return to Rainspell Island, there are only three goblins who attempt to become Jack Frost's favourites over his snowman army. In the movie, the three goblins' names are Edison, Leonardo, and Newton. Their voices are played by Tim Whitnall, Keith Wickham, and Paul Keating. 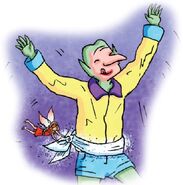 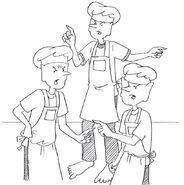 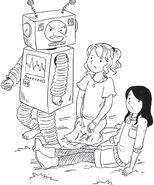 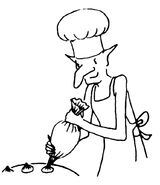 Add a photo to this gallery
Retrieved from "https://rainbowmagic.fandom.com/wiki/Goblins?oldid=65211"
Community content is available under CC-BY-SA unless otherwise noted.